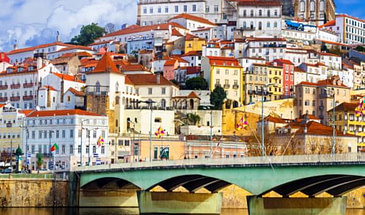 Travel with us outside of Lisbon to the City of Knowledge, Coimbra , a UNESCO World Heritage site, and one of the most important cultural and historic sites in Portugal.

On this Jewish tours to Coimbra travel with us outside of Lisbon to the City Of Knowledge in Portugal. Coimbra a UNESCO World Heritage site, and one of the most important cultural and historic sites in Portugal.

See the University of Coimbra known as one of the oldest universities in Europe which dates to the 13th century. The Baroque Library ( Biblioteca Joanina ), ornate Halls of the Royal Palace. The Iron Gate, original entry Muslim fortress of Almanzor (10th century ). And the Palace of Schools, historic center par excellence of  the University,  makes this stop a most.

Discover the center of Portugal

Escape the hustle and bustle of Lisbon’s City Center on a private full-day tour.Starting with a pick-up from your hotel and driving to Coimbra, the capital city of the Centro Region.

Upon arrival, we will explore the beautiful narrow streets and marvel at the architecture. Baroque, Renaissance and modern periods including influences from the Moors and Romans. Admire the austere façade of the Sé Nova de Coimbra (New Cathedral of Coimbra), and one of the most important Romanesque Roman Catholic buildings in Portugal at the Sé Velha de Coimbra (Old Cathedral of Coimbra).

Learn about the 13th-century origins of one of the oldest universities in Europe, and discover the Pantheon of Portugal’s 1st two kings. Admire the spectacular views from the University and visit one of the most beautiful Baroque libraries in the world.

Time for our lunch experience in the medieval city of Coimbra and sample food from this region of Portugal, and meet the friendly locals. Learn about the 13th-century origins of one of the oldest universities in Europe, and discover the Pantheon of Portugal’s 1st two kings.

After lunch, we will continue our tour to Aveiro, the “Venice of Portugal” considered the most romantic city in Portugal. Explore the enchanting canals as we take a wonderful canal ride; see the lovely squares, homes, and historic monuments such as the 15th-century Monastery of Jesus.  We will stop for an afternoon snack of Aveiro’s traditional ovos moles (soft eggs) sweets before we return to Lisbon.

What can you see:
Explore the historic streets of Coimbra in Portugal’s Centro Region
Take a canal ride and discover the “Venice of Portugal” at Aveiro
Learn about one of the oldest universities in Europe and admire the spectacular architecture

Our tours are always private (just you and our guide/driver).

The tour highlights are just suggestions of places to visit. The tour itinerary will be designed according to your preferences and the tour length.

Each day tour is designed to last approximately 8 hours (hotel-tour-hotel).

There are no reviews yet.

Be the first to review “Jewish Coimbra and Aveiro” Cancel reply

Open All Close All

Relevant information for groups:
- Our tours are private -
Maximum 5 persons per group -

Our drivers have safety and health training.
Meet & Greet:
- Hand sanitizer will be provided to passengers by driver every time before entering the vehicle;
- The driver will wear a face mask at all times and will keep a safe distance from customers avoiding close contact, handshakes etc;
- Luggage will only be handled with customers' authorization.
The driver will use sanitizing products to continually clean the main contact areas inside and outside the vehicle (handles, seats, seat belts, etc).
For safety reasons our vehicles will not provide magazines and water bottles. We apologize for this inconvenience.
Upon completion of each tour, our cleaning team will carry out a thorough cleaning with anti-bacterial products.
Per recent laws: Maximum capacity per vehicle is 2/3 of total occupancy. This is to guarantee adequate distance between passengers.

You can find out more about which cookies we are using or switch them off in settings.

This website uses cookies so that we can provide you with the best user experience possible. Cookie information is stored in your browser and performs functions such as recognising you when you return to our website and helping our team to understand which sections of the website you find most interesting and useful.

Strictly Necessary Cookie should be enabled at all times so that we can save your preferences for cookie settings.

If you disable this cookie, we will not be able to save your preferences. This means that every time you visit this website you will need to enable or disable cookies again.