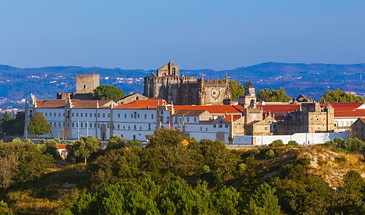 Get a closer look to Tomar Jewish history through this full-day Jewish Portugal tour from Lisbon.

Get a closer look to Tomar Jewish history through this full-day Jewish tour in Portugal from Lisbon to Tomar. Discover the long history of the Jewish people in Tomar from your guide as you walk through the Old Jewry.

In our Jewish Tomar Heritage tour you’ll visit: the most ancient and the only proto-Renaissance Hebrew Temple in Portugal. And the Luso-Hebrew Museum Abrãao Zacuto.

Tomar, the base of the best known military organisation of the Middle Ages, the Order of the Templars.

Our visit begins at the Tomar Synagogue, one of the oldest synagogues in Portugal. After centuries of being desecrated, has  been recovered by the Polish engineer Samuel Schwarz in the first half of the 20th

Built between 1430 and 1460 by order of Infante D. Henrique, the synagogue from Tomar shows the importance that the Jewish community had in the city since the 14th century, firstly in service of the Order of the Temple, and then for the Order of Christ.

Our visit continues to the Castle and Convent of the Knights Templar, a Unesco’s World Heritage Site, has one of the most expressive testimonies to the history of Portuguese architecture, that later became the Order of Christ, construction of which occurred between the 12th and the 17th centuries.

Our tours are always private (just you and our guide/driver).

The tour highlights are just suggestions of places to visit. The tour itinerary will be designed according to your preferences.

There are no reviews yet.

Open All Close All

COVID-19 PROCEDURES:
Our drivers have safety and health training.
Meet & Greet:
- Hand sanitizer will be provided to passengers by driver every time before entering the vehicle;
- The driver will wear a face mask at all times and will keep a safe distance from customers avoiding close contact, handshakes etc;
- Luggage will only be handled with customers' authorization.
The driver will use sanitizing products to continually clean the main contact areas inside and outside the vehicle (handles, seats, seat belts, etc).
For safety reasons our vehicles will not provide magazines and water bottles. We apologize for this inconvenience.
Upon completion of each tour, our cleaning team will carry out a thorough cleaning with anti-bacterial products.
Per recent laws: Maximum capacity per vehicle is 2/3 of total occupancy. This is to guarantee adequate distance between passengers.

You can find out more about which cookies we are using or switch them off in settings.

This website uses cookies so that we can provide you with the best user experience possible. Cookie information is stored in your browser and performs functions such as recognising you when you return to our website and helping our team to understand which sections of the website you find most interesting and useful.

Strictly Necessary Cookie should be enabled at all times so that we can save your preferences for cookie settings.

If you disable this cookie, we will not be able to save your preferences. This means that every time you visit this website you will need to enable or disable cookies again.